More details began to emerge from the Pentagon on Saturday about the three targets the American military struck in Syria late Friday in conjunction with British and French forces. 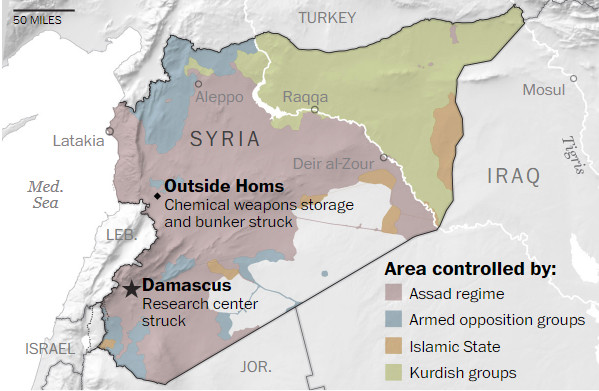 [Inside Trump’s decision to bomb Syria]

The coalition hit the Barzah Research and Development Center outside Damascus with 76 missiles, destroying the facility and setting back Syrian chemical weapons capabilities “for years,” the U.S. military said in an initial assessment. 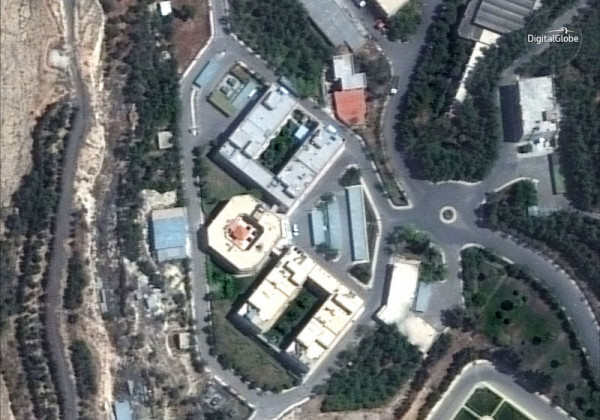 Before: An image taken the day before the missile attack shows the Barzah research facility in northern Damascus. (satellite image ©2018 DigitalGlobe) 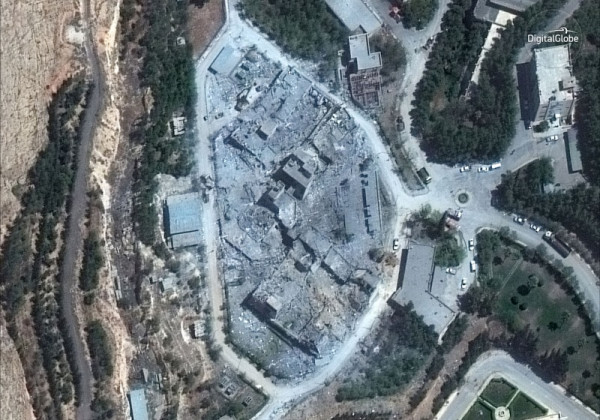 After: An image taken after the attack shows the research facility appears to have been destroyed. (satellite image ©2018 DigitalGlobe)

“We deployed 105 weapons against three targets that will impact the Syrian regime’s ability to develop, deploy and use chemical weapons in the future,” Marine Corps Lt. Gen. Kenneth F. McKenzie Jr., director of the Joint Staff, said during a news conference on Saturday morning. He described the facilities as “fundamental components of the regime’s chemical warfare infrastructure.”

To conduct the strikes, the U.S. military joined forces with British and French units and launched from air and naval platforms in the Red Sea, Persian Gulf and the Eastern Mediterranean. 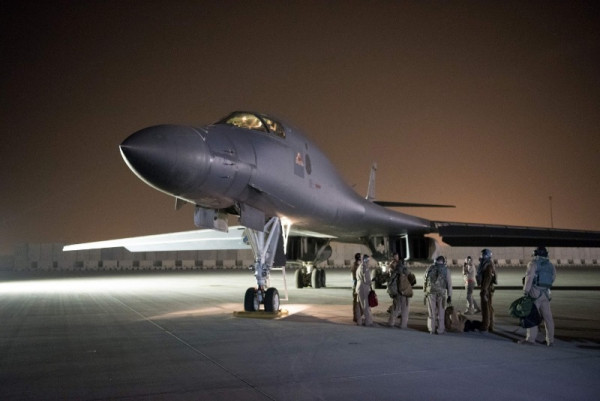 In early 2017, inspectors from the Organization for the Prohibition of Chemical Weapons visited the Barzah facility. The site is part of the Syrian Scientific Studies and Research Center (SSRC), an organization the U.S. Treasury calls “the Syrian government agency responsible for developing and producing non-conventional weapons and the means to deliver them.”

The United States imposed sanctions on 271 personnel from the SSRC last year in response to a sarin attack on civilians in Khan Sheikhoun. The Treasury said the staff had expertise in chemistry and related disciplines and had worked in support of the SSRC’s chemical weapons program since at least 2012.

The Trump administration conducted a missile strike against one of Assad’s air bases last year in April in response to the chemical weapons usage in Khan Sheikhoun.

A report by the BBC shortly after last year’s strike found that the Syrian government continued to manufacture chemical weapons at research facilities.

Citing a Western intelligence document, the BBC reported that the Syrian government was making chemical weapons at three SSRC sites, including the one in Barzah that the coalition of U.S., British and French forces said it destroyed Friday night. 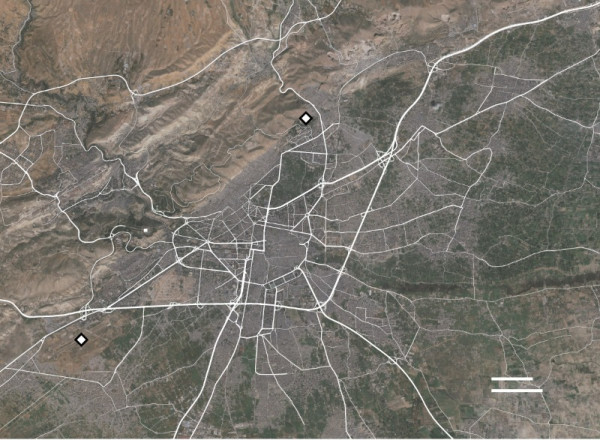 The Western intelligence report, according to the BBC, found that the Barzah facility specialized in installing chemical weapons on long-range missiles and artillery.

Less is known about the facility that was attacked outside Homs. The U.S. military described it as the Hims Shinshar chemical weapons complex. 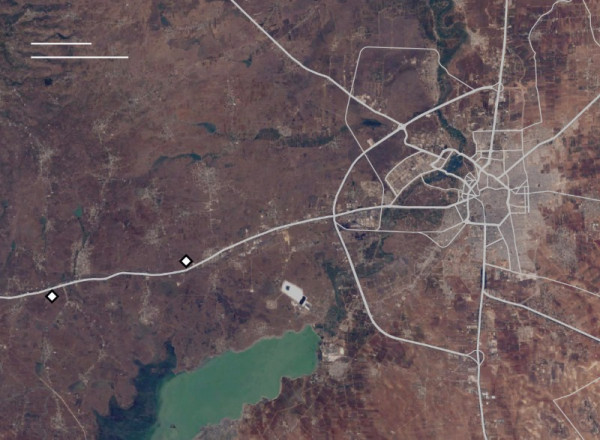 In the 1980s, the New York Times reported a story about an air base outside Homs, known as Shinshar, where the Soviet Union was installing antiaircraft missiles, aimed primarily at fending off Israeli attacks. 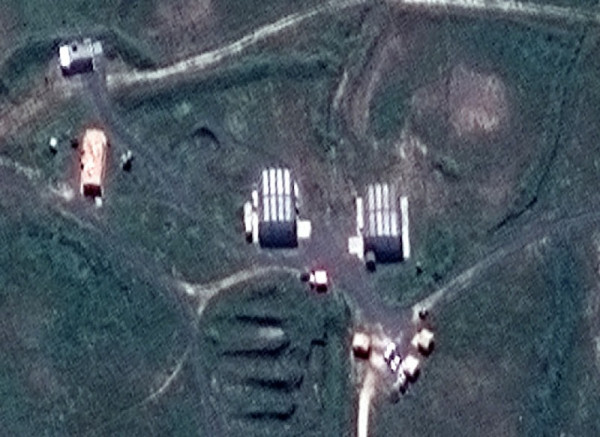 Before: An image taken the day before the missile attack shows the Shinshar chemical weapons storage outside Homs. (satellite image ©2018 DigitalGlobe) 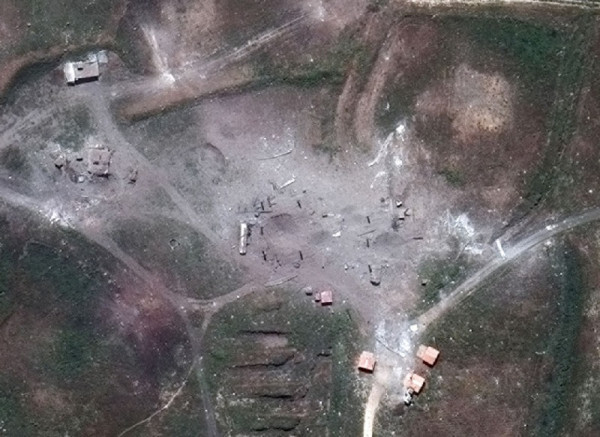 After: An image taken the day of the attack shows the weapons storage appears to have been destroyed. (satellite image ©2018 DigitalGlobe)

McKenzie said initial assessments indicated the storage facility was destroyed but that the bunker facility was “successfully hit and sustained damage,” suggesting the Pentagon wasn’t confident the strikes had fully obliterated the underground complex or hadn’t intended to do so.

It wasn’t clear if the facilities the New York Times and Syrian journalists referenced in Shinshar were the same as the complexes the military struck late Friday. The Pentagon described the facility as being west of Homs, whereas the village of Shinshar is due south. 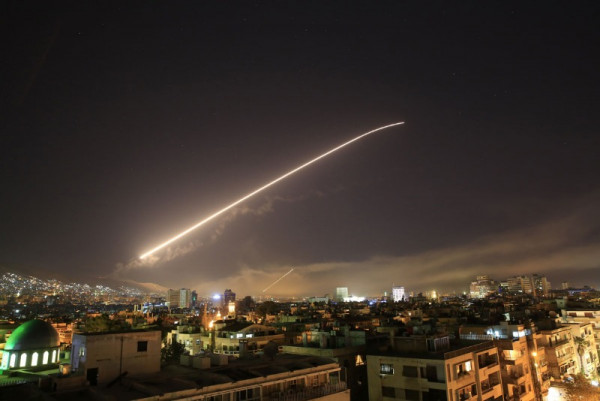